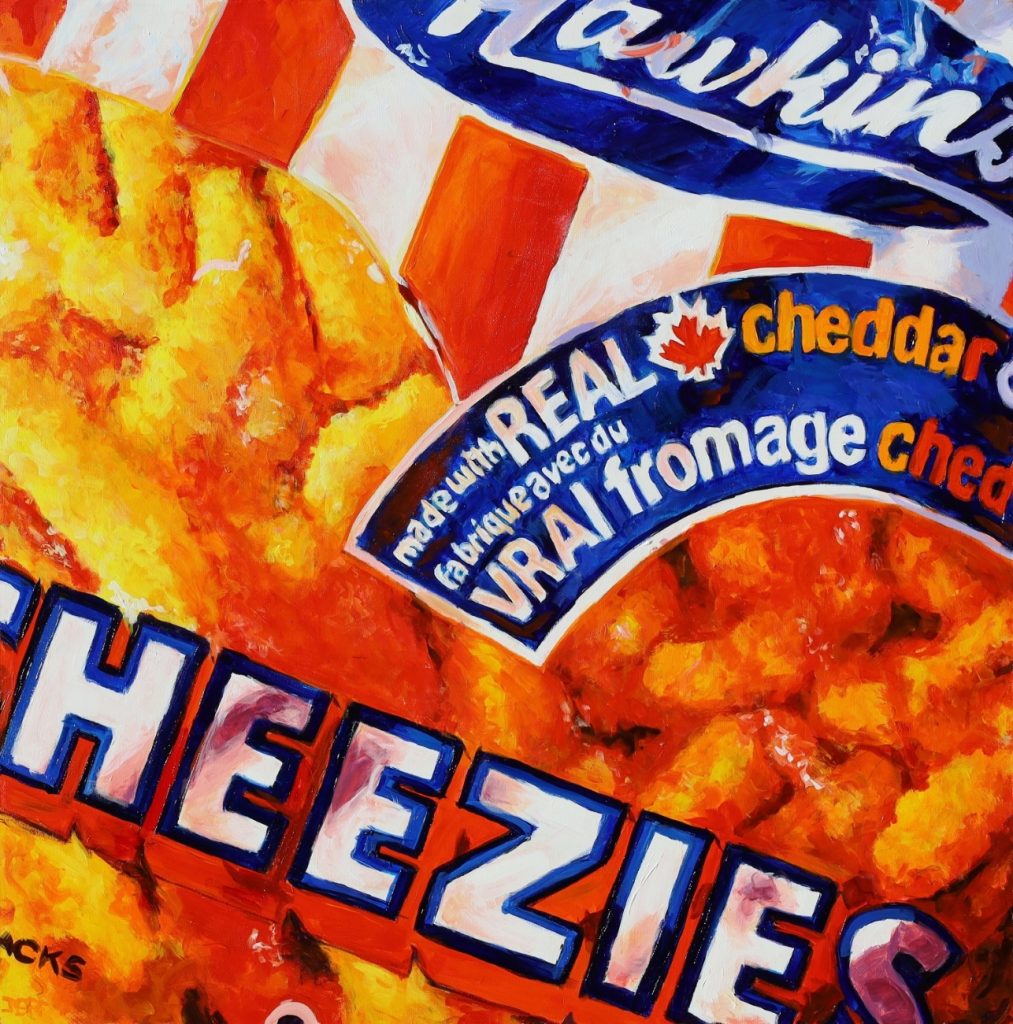 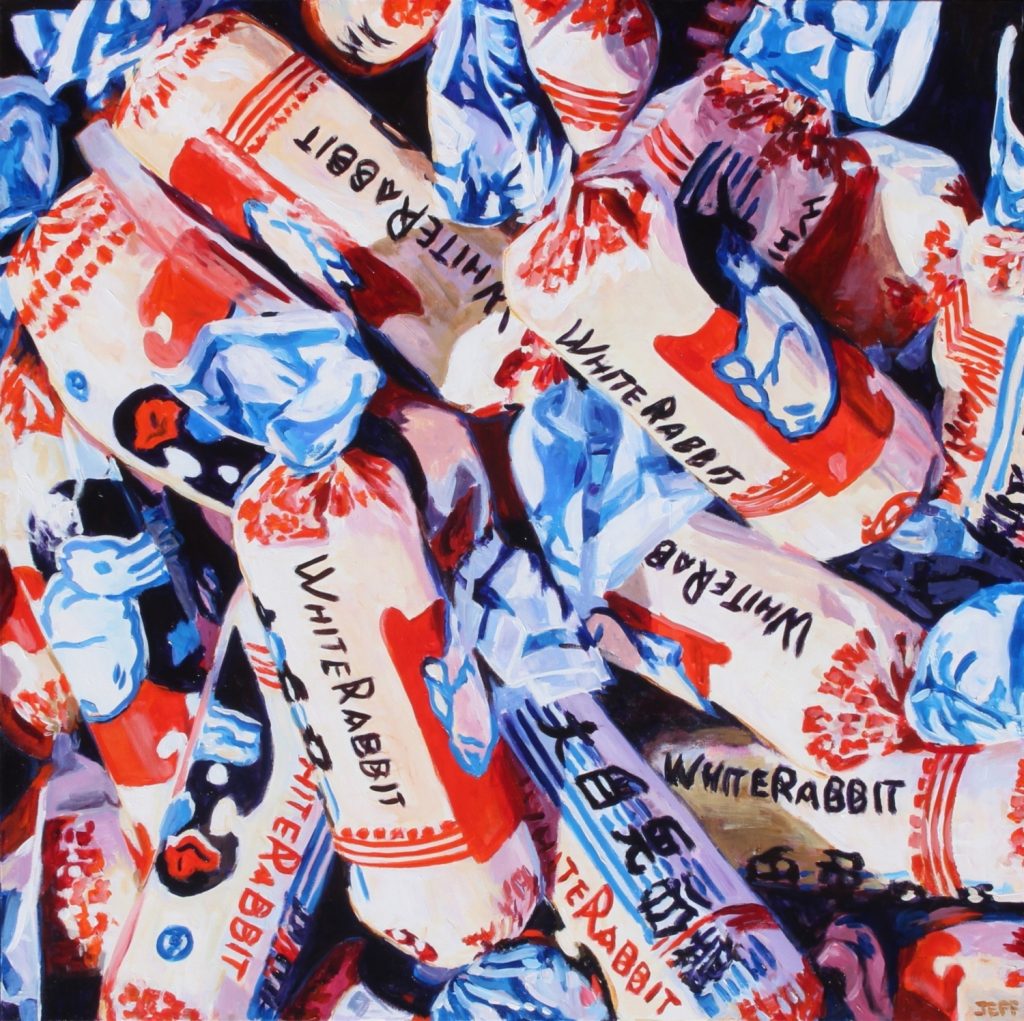 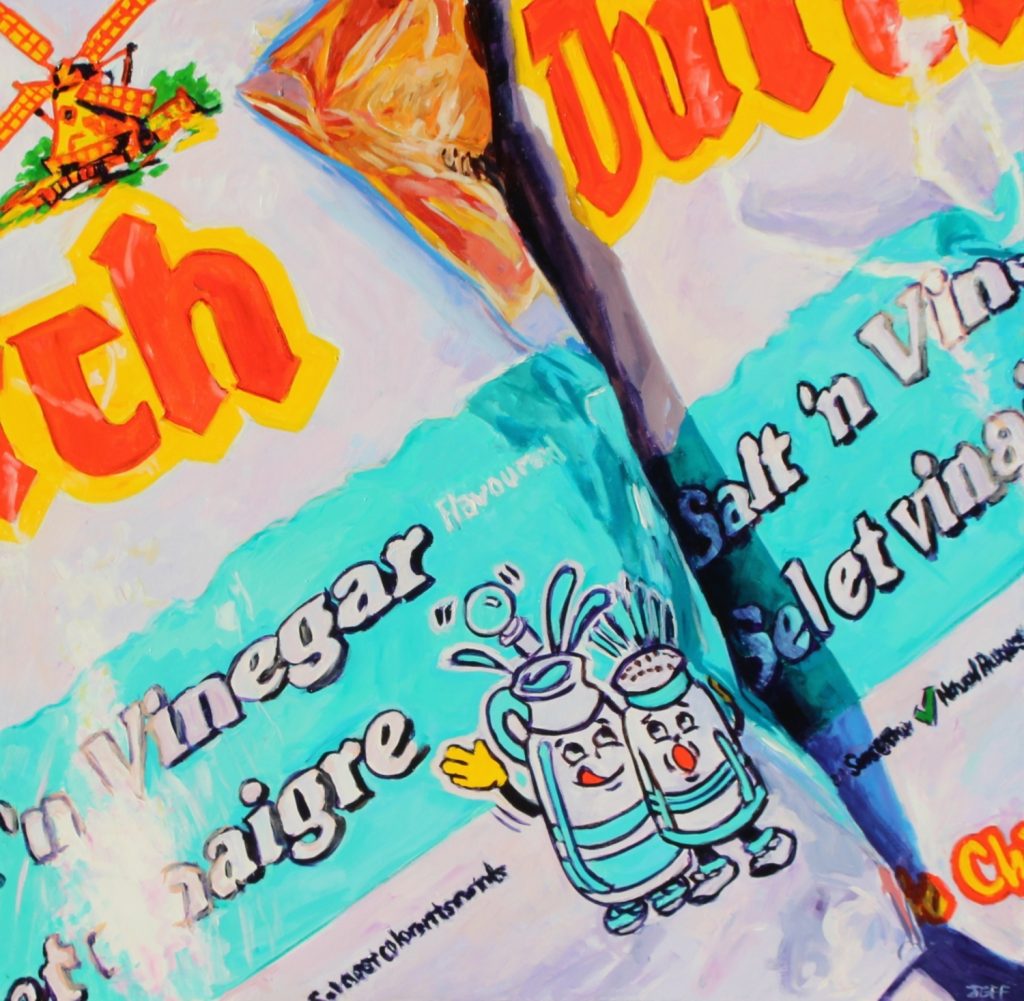 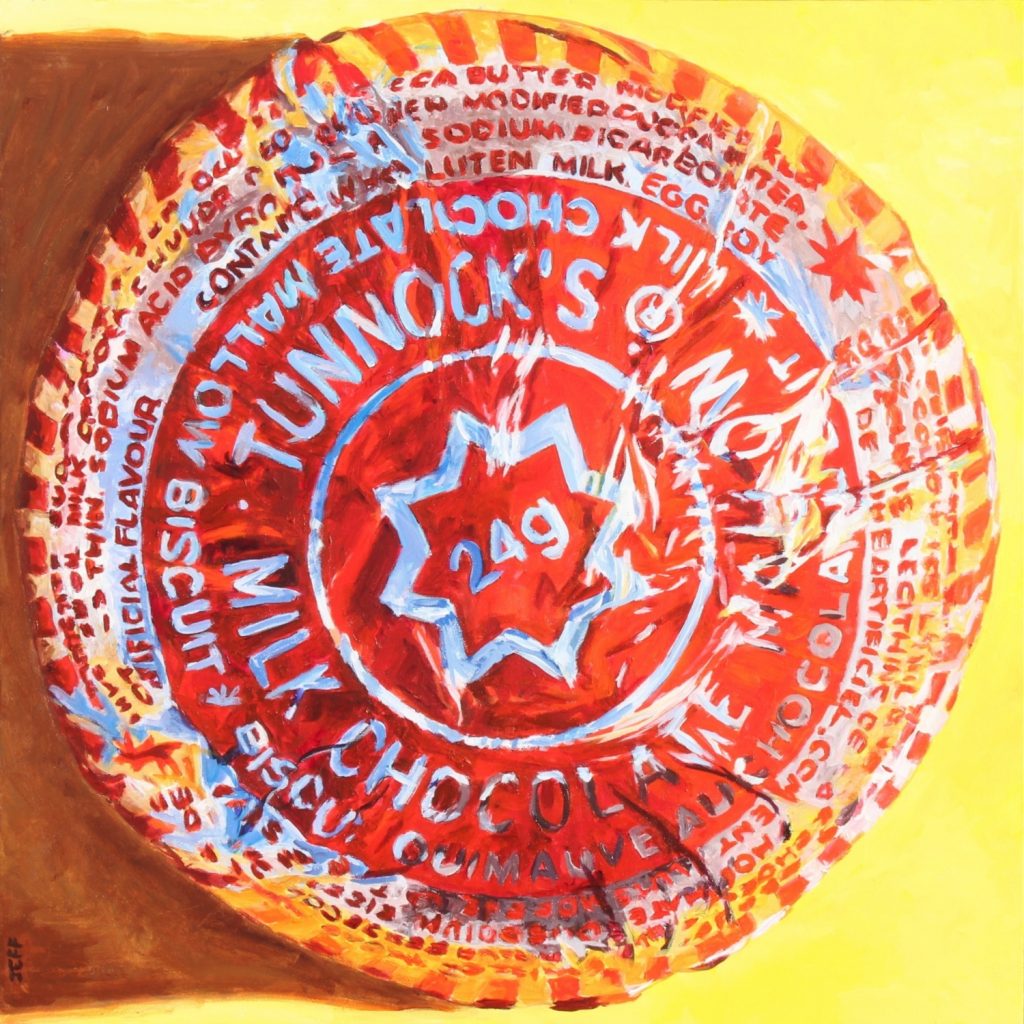 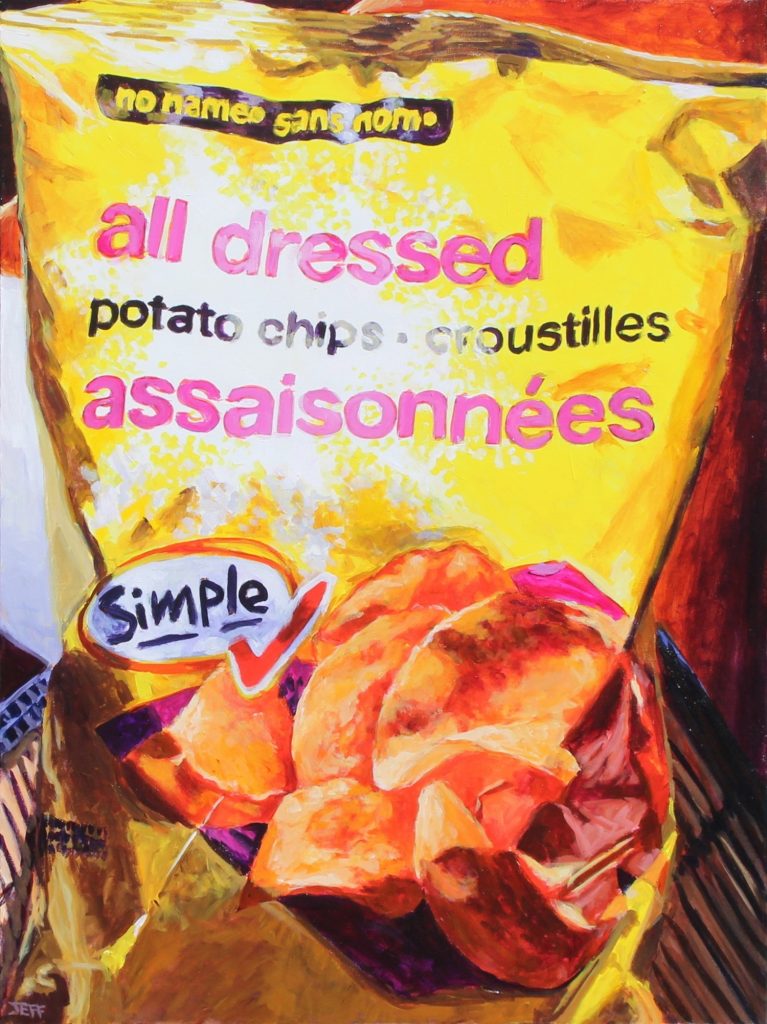 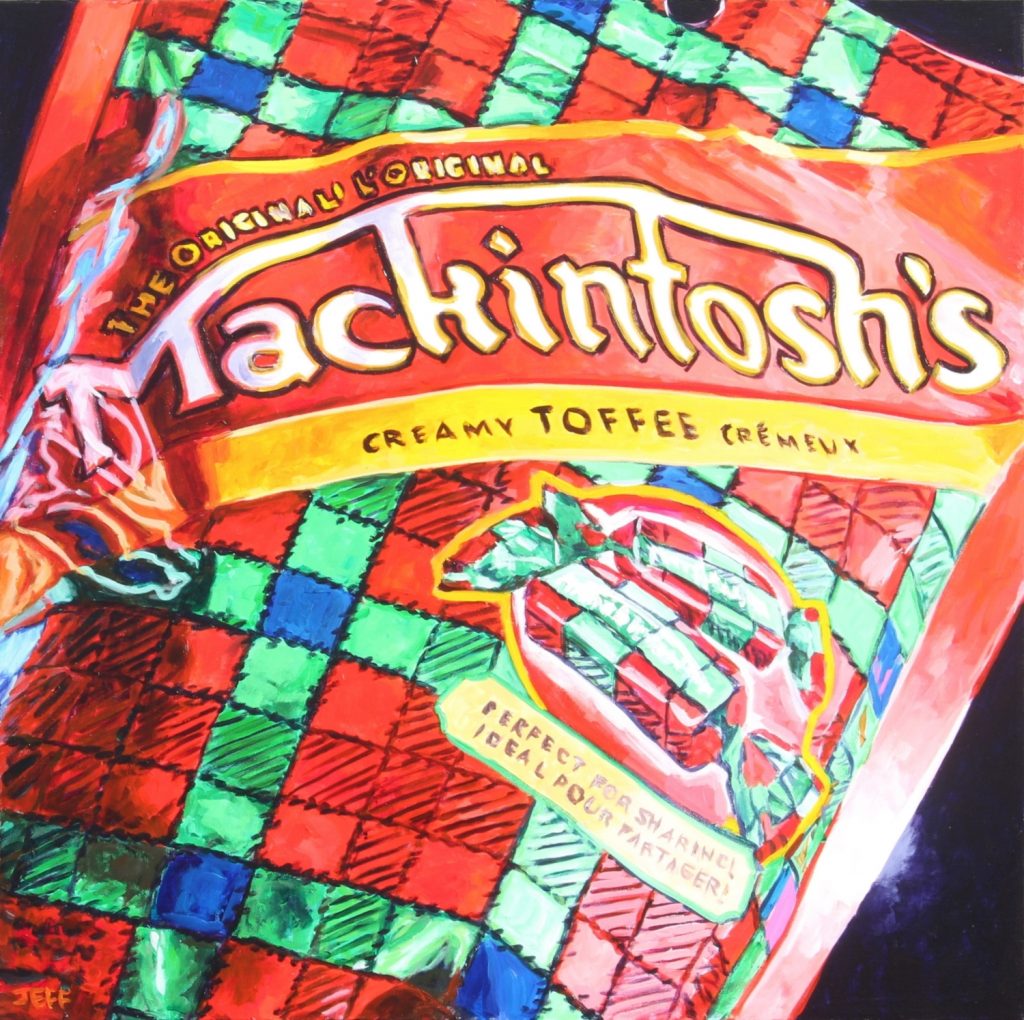 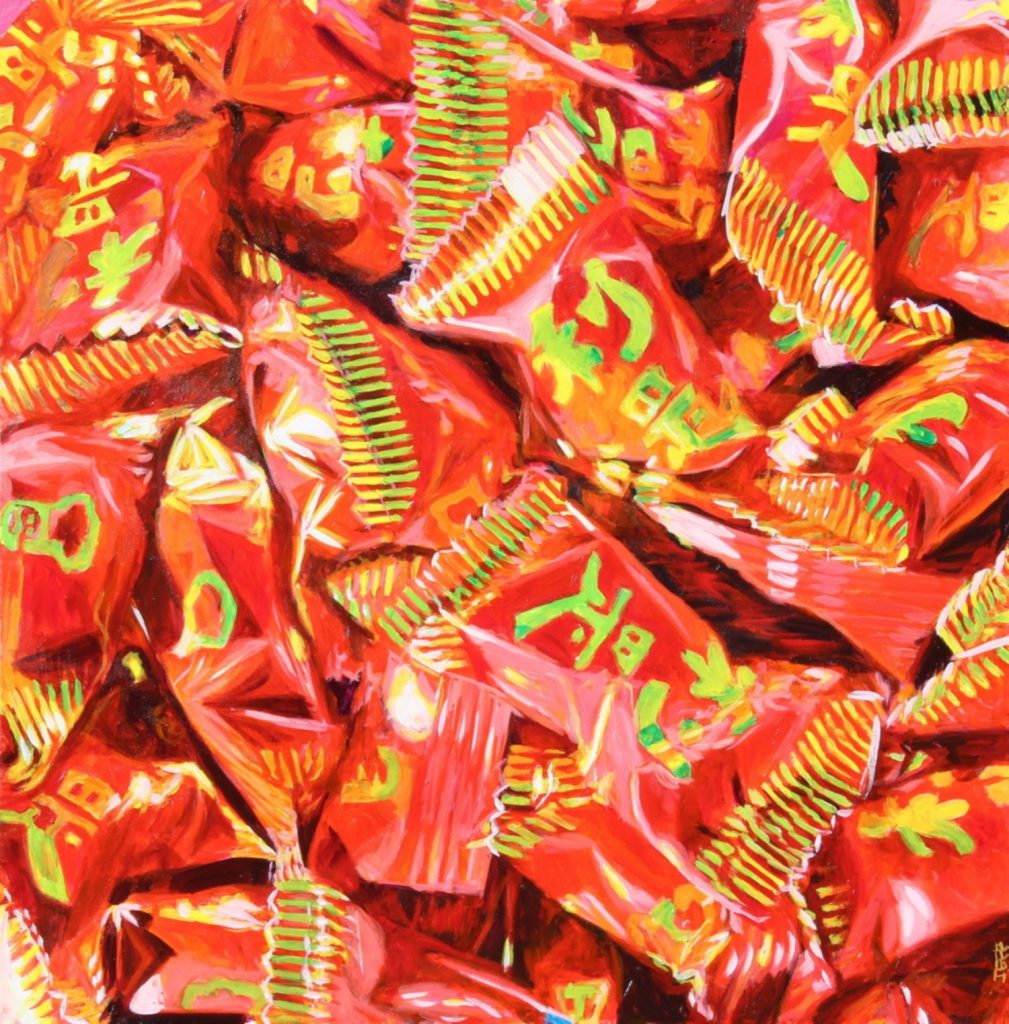 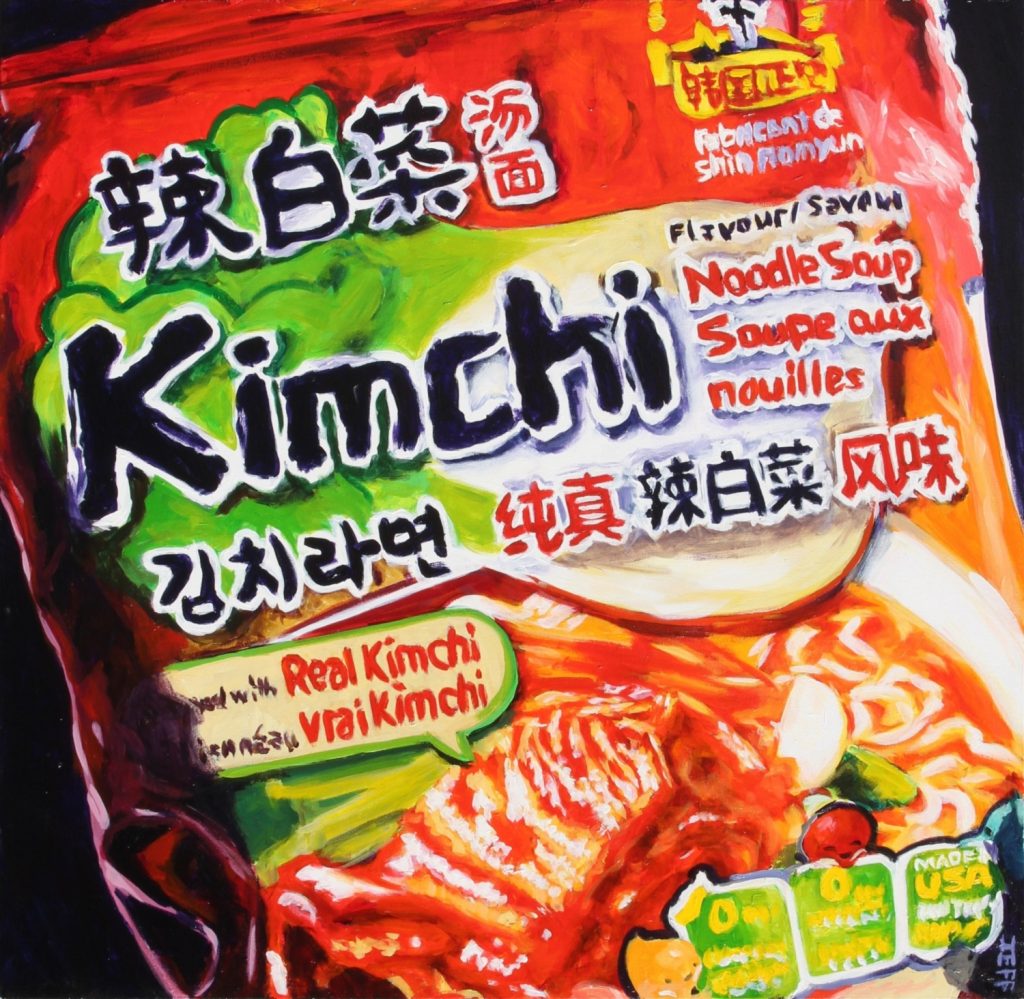 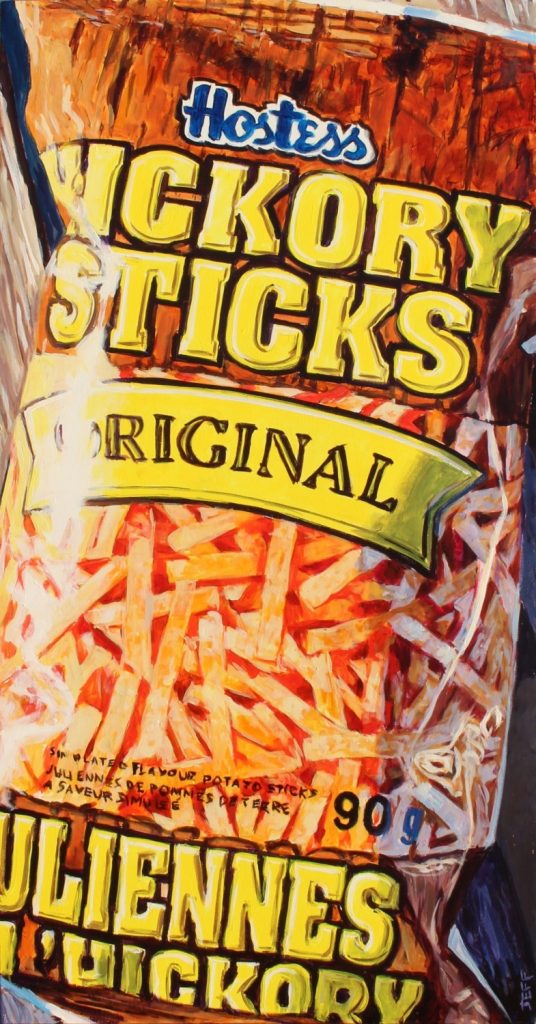 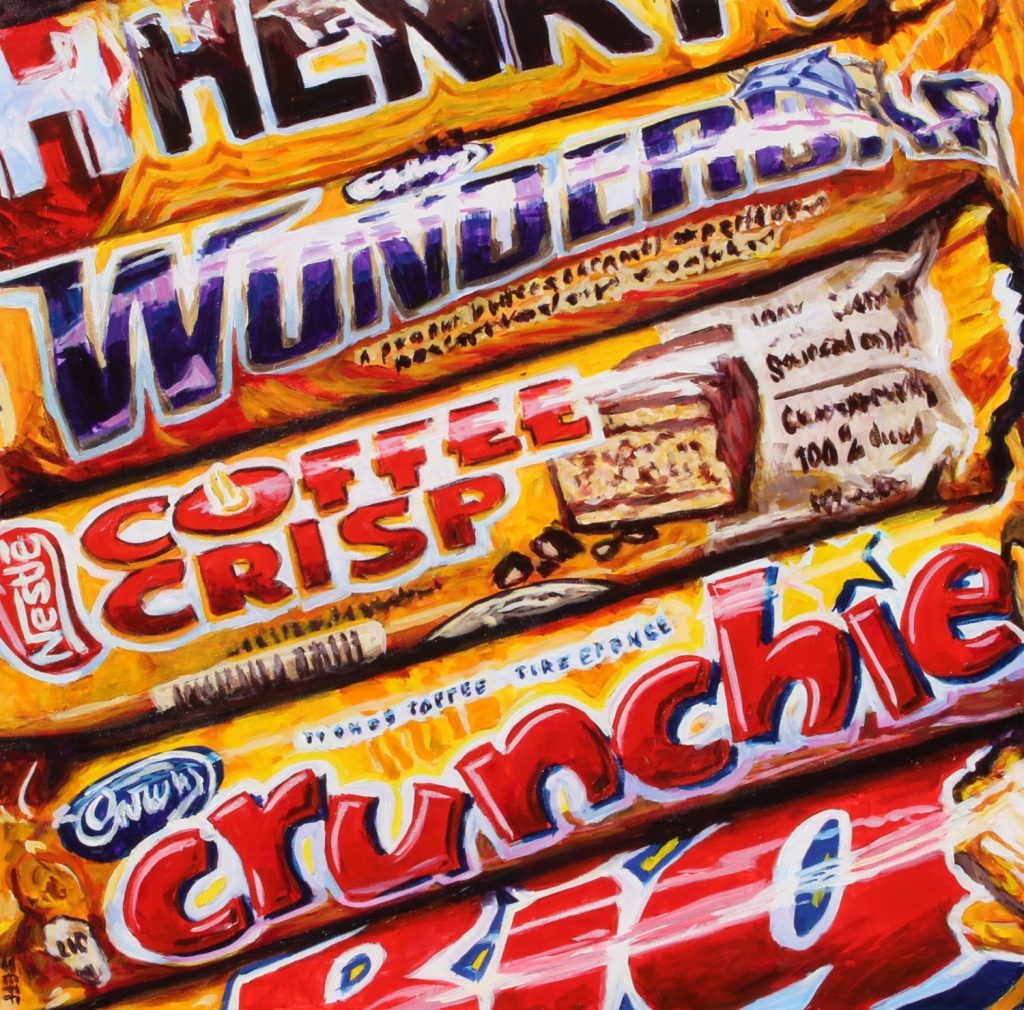 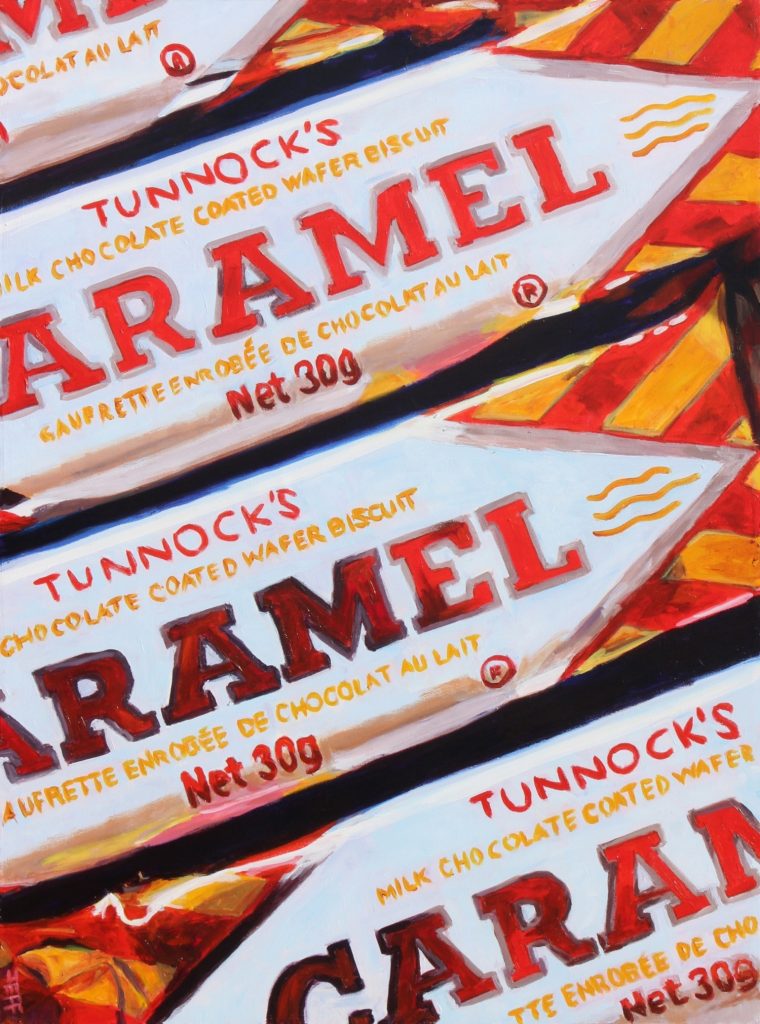 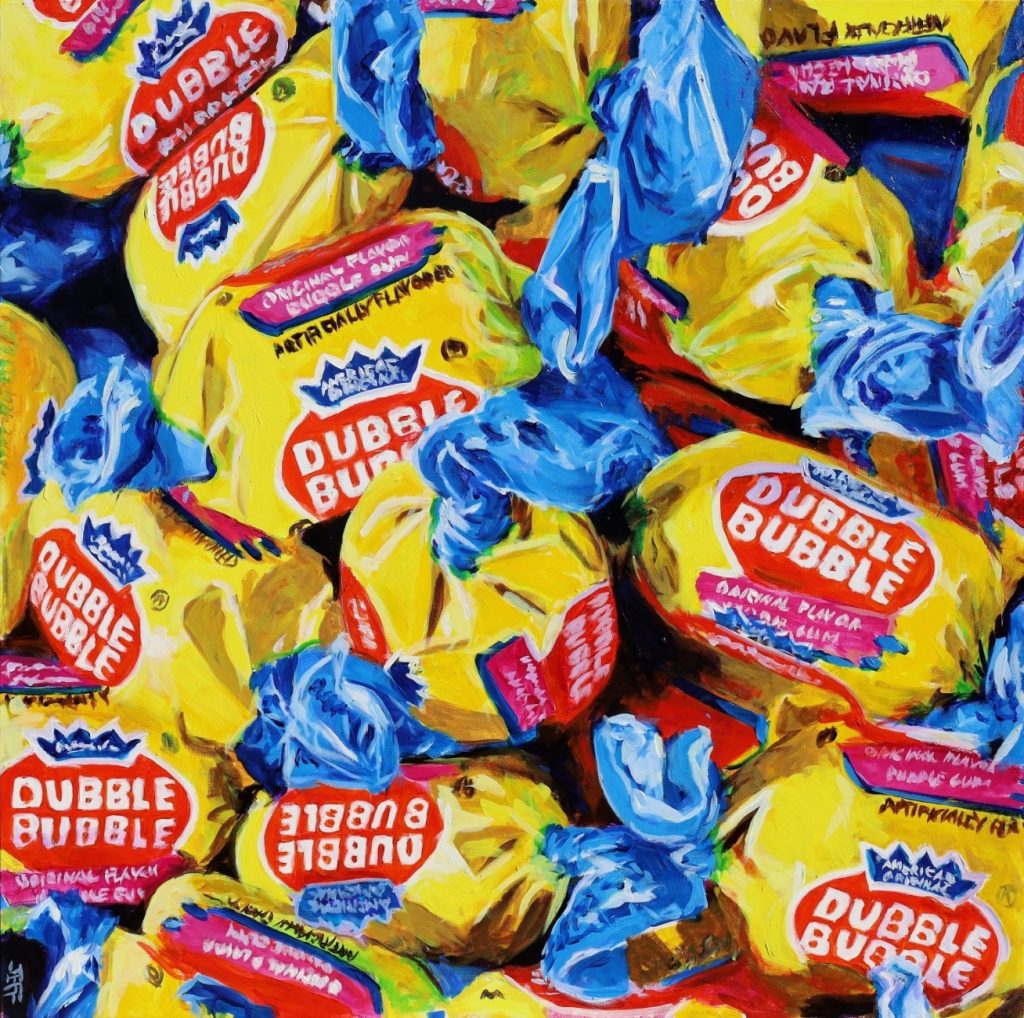 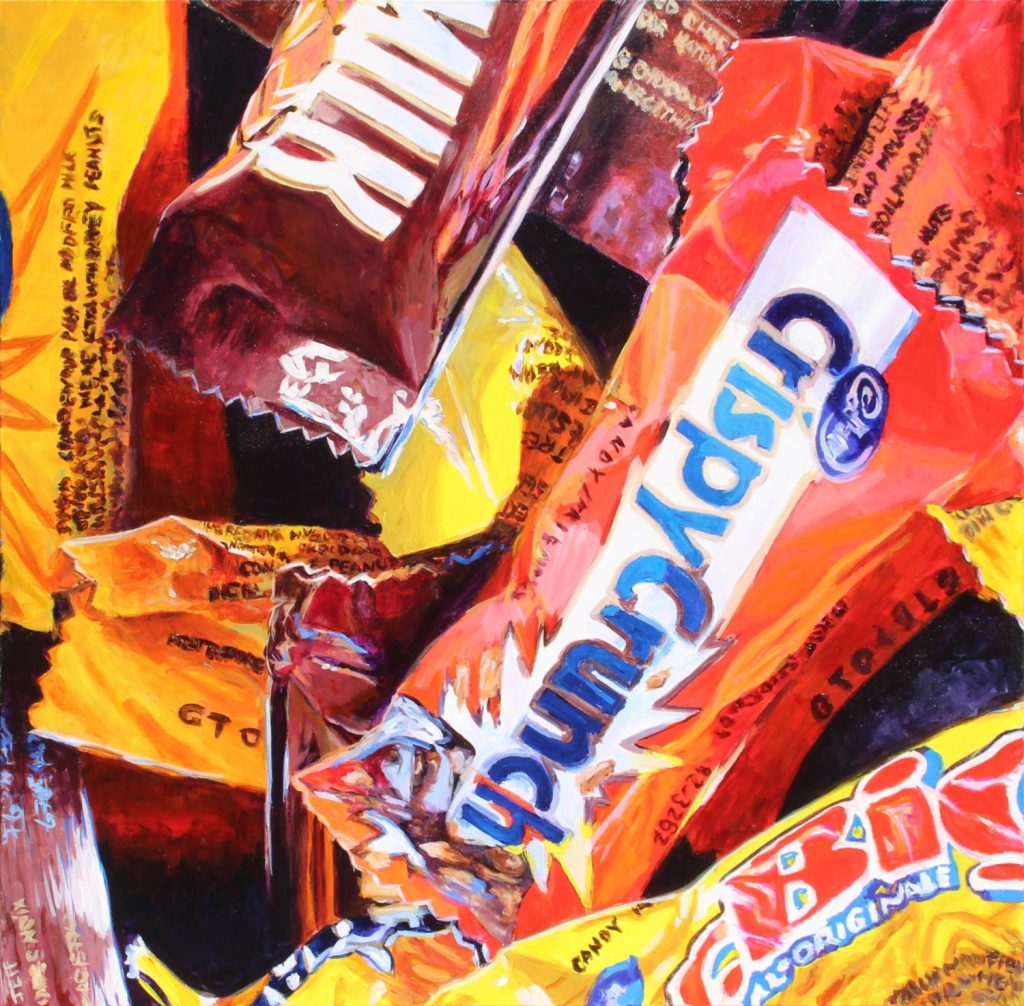 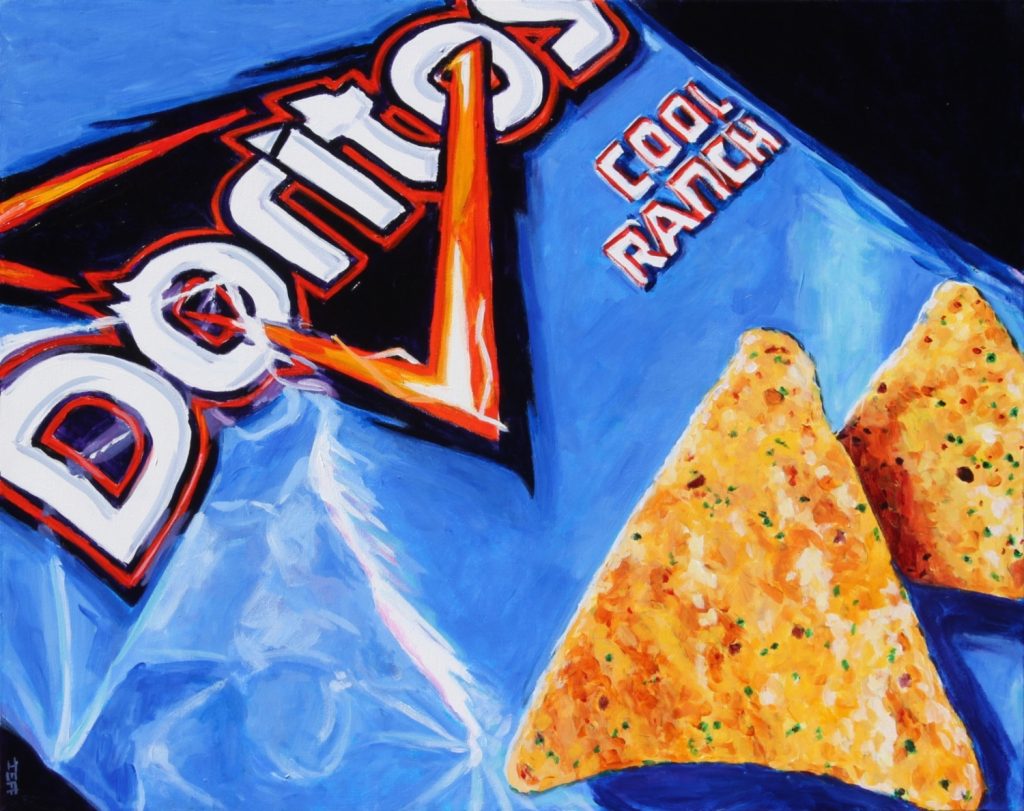 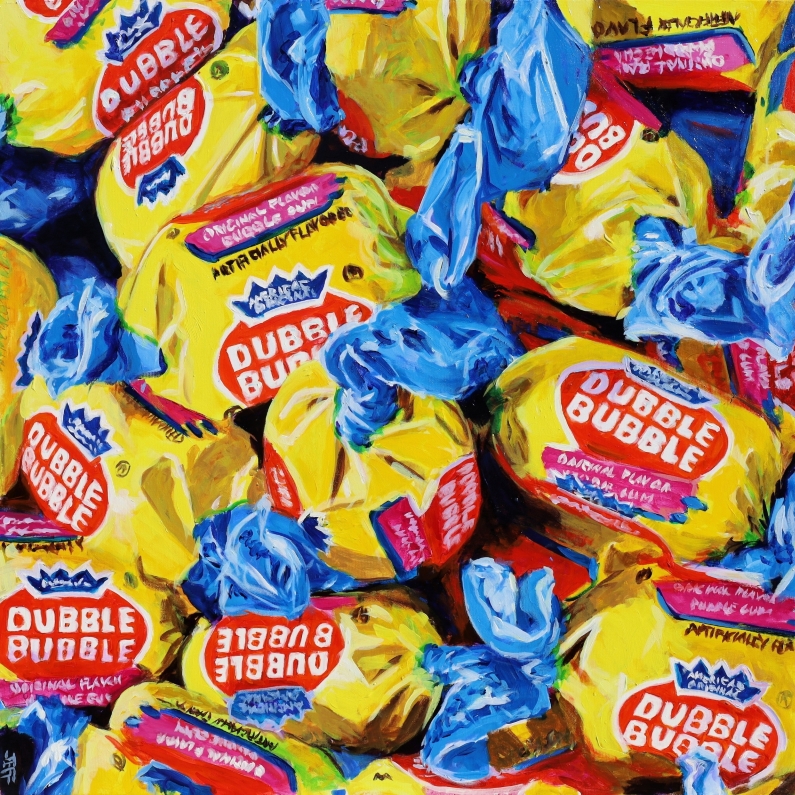 The exhibition takes inspiration after the eighties style of curation of New York, where curators would extensively add ambient sound, furniture, coloured lights, and other installation forms to create an atmosphere that allows the art to inhabit real or fictional environment(s). The resulting exhibition space transforms the platforms of which art is exhibited into an integral part of the discussion – making the installation into art itself. This approach is very suitable for the Jeff Wilson’s exhibition SuperFiller as the subject of the paintings inhabit supermarkets. The exhibition aims to disrupt the grocery shopping experience to highlight the systems and tools that perpetuate consumerist capitalism.

Jeff Wilson visually feeds the visitors an array of junk food – chips, chocolate bars, candies – as a social metaphor for overconsumption. Most overconsumption at its core is the populous validating the nodes of cultural capita. This leads the most privileged in society to maintain an overattachment to brand recognition to authenticate the illusionary realisms that occur within societal status. This active authentication to validate one’s ideological representation of prestige is extended to everyday tasks like grocery shopping – the privileged consumer buys the overpriced, “fancy” Grey Poupon mayonnaise, not the generic mayonnaise; any regular consumer should strive to buy Old Dutch’s Salt & Vinegar potato chips, not No Name All Dressed. This process of prioritizing the most esteemed brand instead of evaluating content and quality within products is reminiscing to the catchphrase most associated with junk food “high calories and low nutritional value.” The enticing packing is boldened by the emotional connection shoppers may have towards products instead of intellectually distancing from its

To recreate a supermarket, Lipont Gallery repurposed a shopping cart and baskets as a platform to exhibit art. The gallery space is situated between big supermarkets, where every now and then, an unfortunate shopping cart is discarded on the parking lot. What is particular about the shopping cart we invited is that the grocery store it belongs to is very far away from our location. Upon research, I found out that Lipont is a short walk away from a Return It Bottle Depot. Although the narrative of our exhibited shopping cart is unknown, I am compelled to imagine the journey the shopping cart traveled to end in Lipont’s parking lot. Though shopping carts serve the privileged who can afford to pop at supermarket, they also provide service to homeless people who transport their possessions and recyclable bottles. The overconsumption by the privileged and excessive recycling by the most vulnerable in society may appear cyclical but it is a depleting spiral.

The shopping cart and shopping basket are instrumental parts of the grocery shopping experience and overconsumption ecosystem. Both tools enable and encourage increased buying habits to the detriment of the customer and the environment while maximizing companies’ profit. There is a charm is seeing a discarded object being discussed in relation to art and sometimes being elevated to art status. The current environmental climate places great importance for companies to be more sustainable and although the answer is for consumers to buy less and companies to produce less; the answer all companies promote is still rooted in complicit methods of consumerist capitalism; keep buying – but the new packaging is “recyclable.”

Much like supermarkets, commercial art galleries follow the same modus operandi. As undesirable as it sounds, works of art undergo the pipeline of being labeled, displayed, and sold. Even the roles of the gallery structure follow the retail hierarchy – gallery attendant & cashier; art consultant & sales associate; archivist & stock inventory, gallery director and store manager. Buy, consume, and discard; Label, display, and sell. These parallels inspire much of the exhibition’s round layout. The intention lays in recreating a nostalgic environment based in childhood treats while, almost begrudgingly, critiquing the systems and tools consumers willingly enjoy and unconsciously partake in. 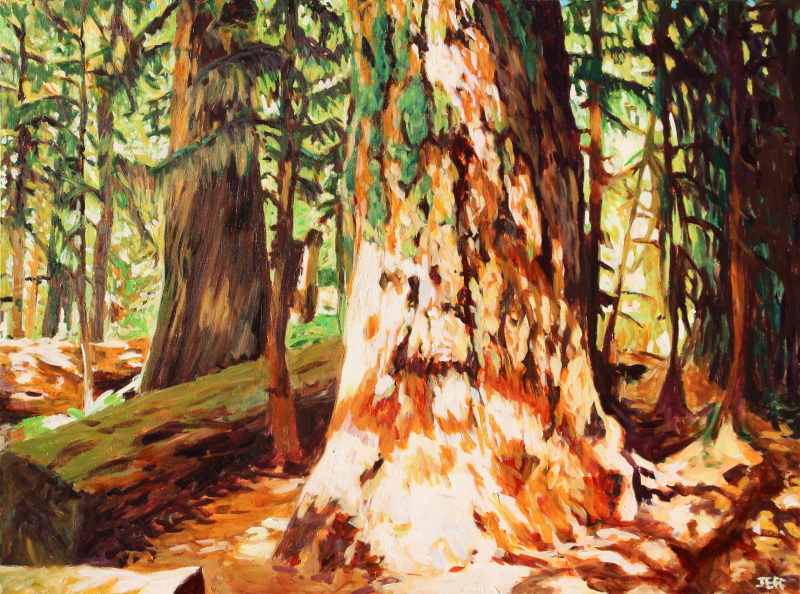 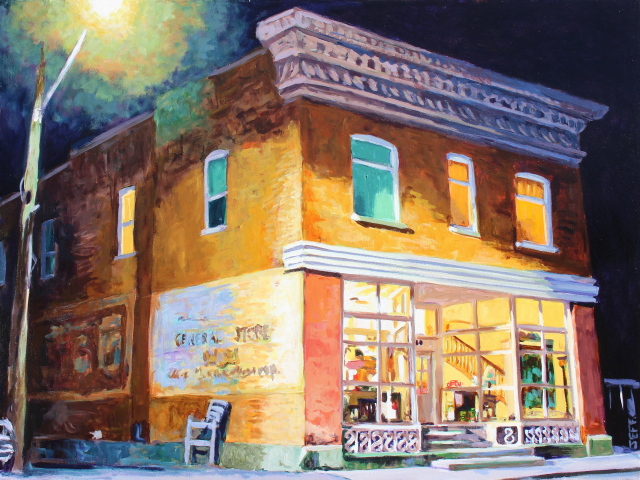 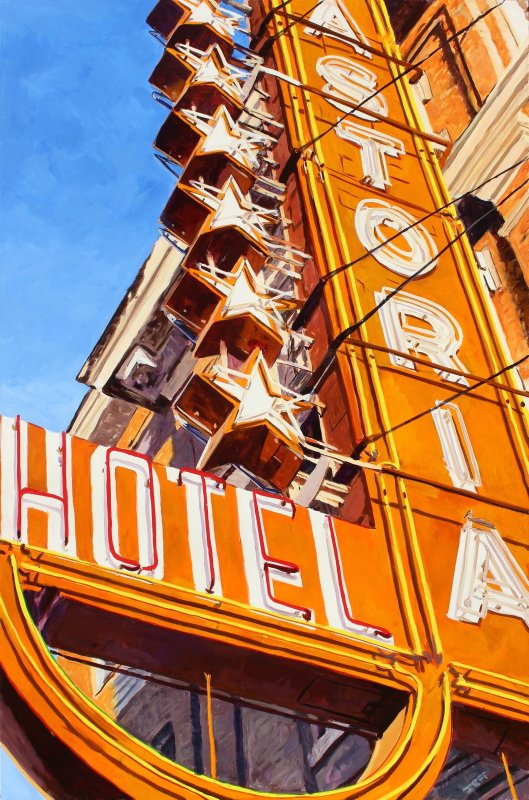 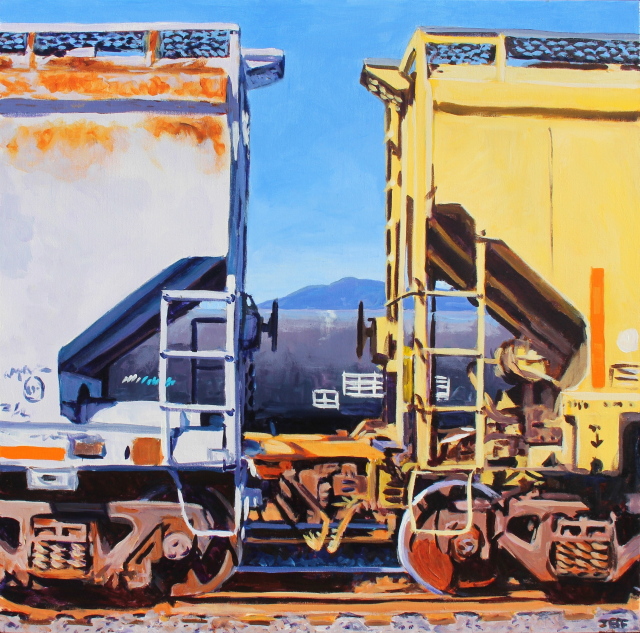 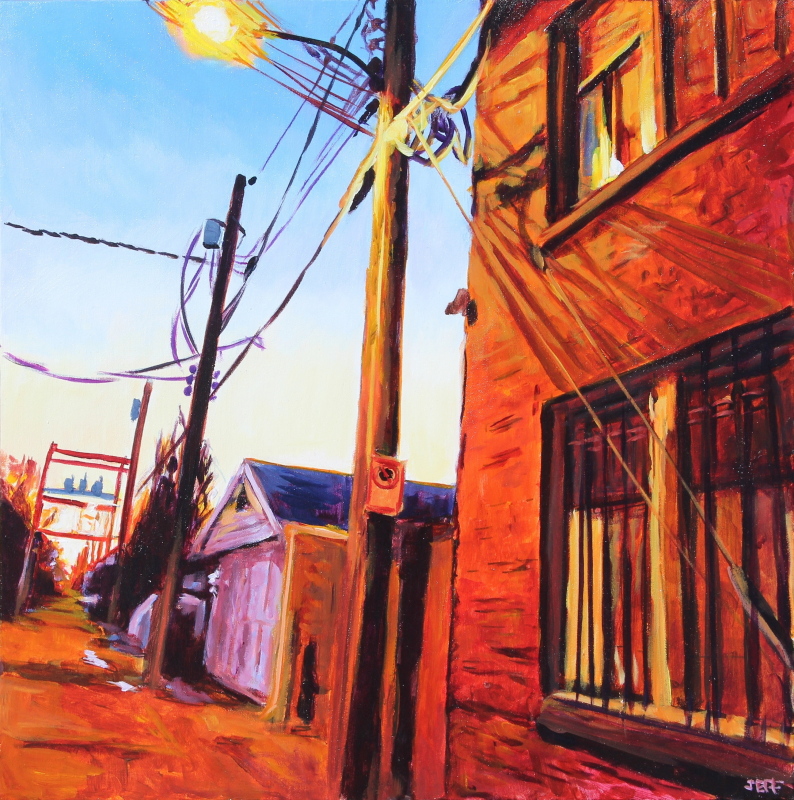