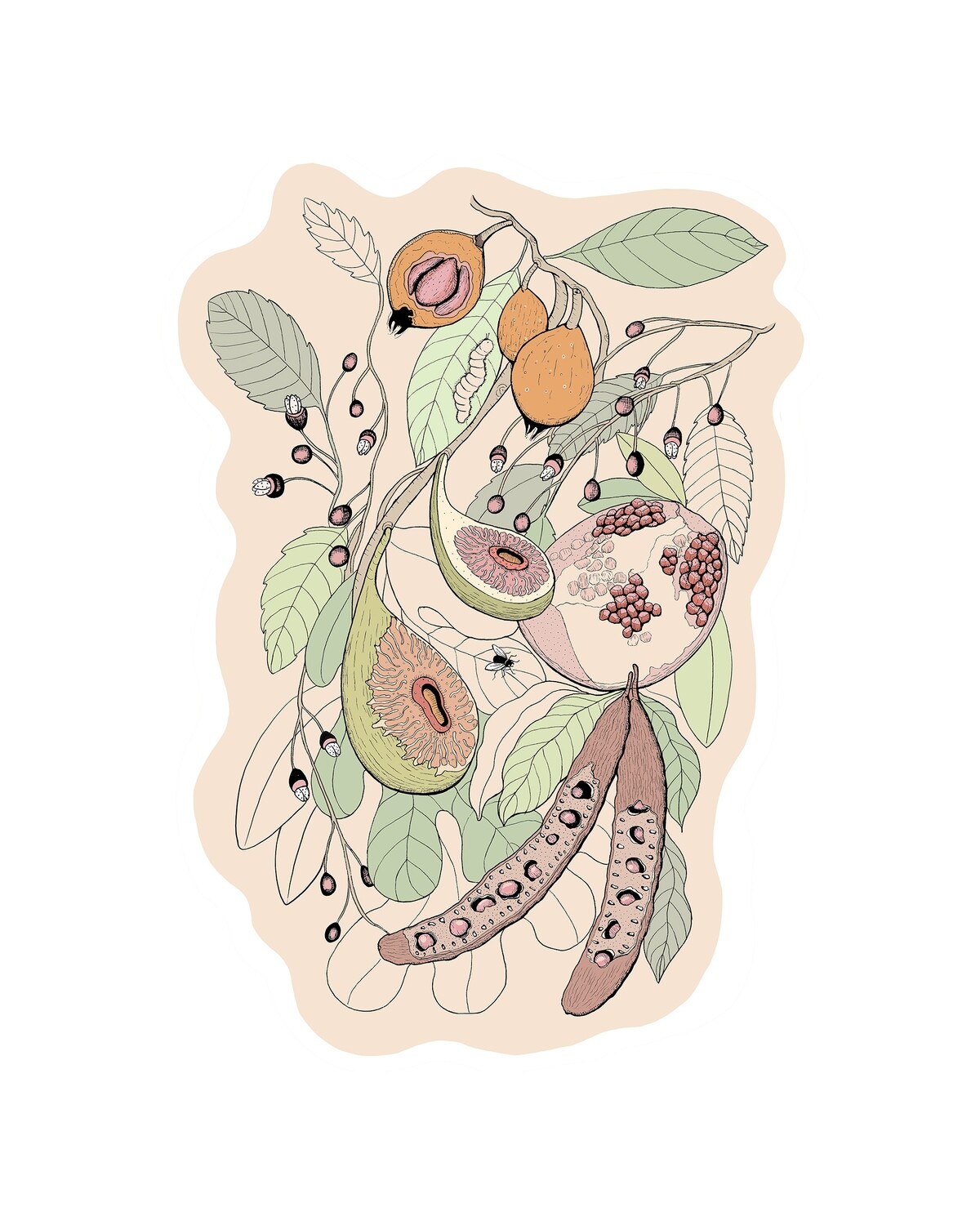 pen and digital colour on paper

Adriatic Fruit pictures six fruits native to the place I was born—Croatia. From top to bottom: loquat, hackberry, pomegranate, figs, and carob. Carrying the symbolism of fertility and sensuality amongst other messages, these fruits inspire both pleasure and reflection. I originally created this piece in pen as an arm-sleeve tattoo design for myself, later deciding I wanted it to inspire in their homes as a print instead.

Loquats grow in the tree next to my family home’s terrace. The fruit hangs over the balcony, perfectly in place for summer sugar cravings. They’re a lesser-known and unappreciated fruit, but one whose bright colour and sweet flesh always hits the spot.

Loquats are symbols of luck, wealth, and endurance. In Chinese mythology, their sweet fruits dropped into the river where passing fish would consume them. Their magical properties would propel the fish up river, against the current, to eventually be turned into dragons. In the same way, loquats instill in us the knowledge that we all contain the potential to achieve great things—things even greater than we can imagine.

Figs are my favourite fruit. They grow all around my hometown: in people’s front yards, in my grandmother’s garden, and along the forest path to my favourite beach. Green on the outside, deep pink and white on the inside, they pack a sweet, tangy, punch.

The fig represents sensuality, fertility, and inspiration. It calls us to be present in our bodies, and to connect to our own earthly sensuality. Long known as an aphrodisiac, they insist that we pay attention to not only the flow of blood in our bodies, but also to the feelings that arise in our hearts. Many fig flowers are unisexual, and so they remind us that connection with another comes as an addition to the necessary and never-ending work of staying in sensual connection to ourselves. In doing so, the fig promises, we unleash a torrent of energy that guides us to live the life we dream of.

There are two pomegranate trees in my grandmother’s garden. In the fall, they ripen to a luscious red and crack open. Eating pomegranates requires work—you have to peel and push the seeds out in groups. But the reward is a mouthful of tart sweet bursts, albeit with the tolerance of the crunchy seeds.

Pomegranates, with their lush colour and cracks, represent fertility and feminine sexuality. They also represent death and the underworld, and so they can hold many things at once. Pomegranates are aphrodisiacs, but they remind us that with great pleasure come great depths—some of these depths are dark and frightening, and others are expansive and lush. The pomegranate reminds us to accept the dark with the light and make friends with both. It is said to have 613 seeds, and brings with it the birth of ideas, projects, and children.

In symbology, carob represents humility, patience, and trust. In old texts it is called “the poor man’s bread” or “the poor man’s fruit” because of its nutritious beans and fibres. As such, it reminds us that hidden treasures abound if we can recognize their value. Carob trees don’t immediately bear fruit—it takes them years and years to do so. When they finally do, it takes eleven years for them to ripen. Carobs teach us that some things—many things—take time, not because of anything we lack, but because that is the nature of the world.